On the undiscovered temple tour, you’ll get to see temples which are located outside of the main group of temples near Angkor Wat. Here, we will see Kbal Spean at Phnom Kulen, Banteay Srey temple, and Beng Mealea. You’ll be away from the large crowds on this peaceful and relaxing tour which most visitors leave undiscovered! 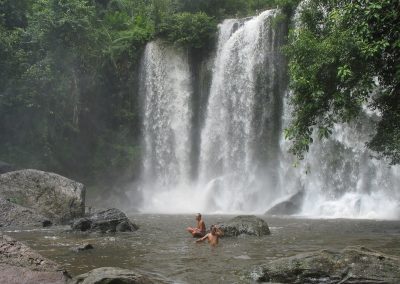 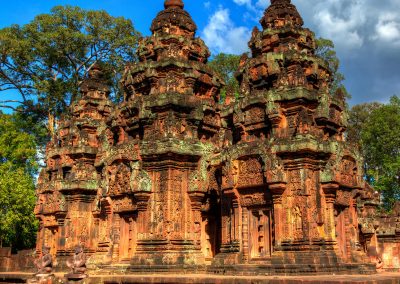 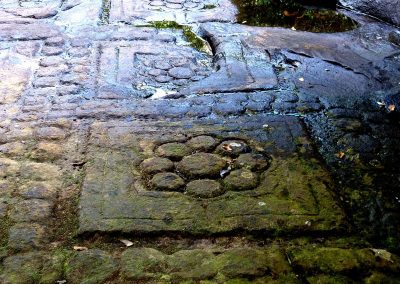 Phnom Kulen is one of the most sacred places in the Kingdom of Cambodia and was the birthplace of the ancient Khmer Empire. Today, many Cambodians visit Kulen mountain to relax by the waterfall and swim in the river which is said to bring good health and a long life.

At Phnom Kulen, we’ll visit Kbal Spean which is where you will see the River of a Thousand Lingas. These lingams are phallic symbols of Shiva, the Hindu God. You will also see many Buddhist carvings as well as many animals. When the riverbed was carved, the water was diverted for the work to be completed. Once complete, the water took its original path over the new intricate carvings.

We will also go to see Banteay Srei temple. Banteay Srei temple was built before Angkor Wat in the 10th century. It was dedicated to Shiva and built using pink sandstone. The walls contain many intricate carvings which are thought to have been carved by women, hence the name Banteay Srei (Lady Temple).

This unique temple was the only temple built by the Khmer which wasn’t built by the King. It was built by two advisors to the king. Although the temple is much smaller than other temples, it contains some of the most intricate carvings created during the Khmer empire. The temple is very popular with visitors and it called a “precious gem” or “jewel of Khmer art”.

Finally, we’ll go to see Beng Mealea temple is in the foothills of the Kulen Mountain range about 40km outside of Siem Reap. Due to its location, Beng Mealea isn’t visited by many tourists and you can explore the temple in peace and quiet.

Beng Mealea was originally built as a Hindu temple, but it does contain some Buddhist carvings. The temple has mostly been left unrestored except to make it safe for visitors. Built on an ancient highway in the style of Angkor Wat, little is known about Beng Mealea temple. This is a fascinating temple which is well worth the drive out to see.