The express temple tour includes Angkor Wat temple, the reason why most people come to visit Siem Reap! We’ll also see the Tomb Raider temple named Ta Prohm which was made famous by the Lara Croft movie. Bayon, the temple with the faces, is also on the agenda for the Express Temple Tour. 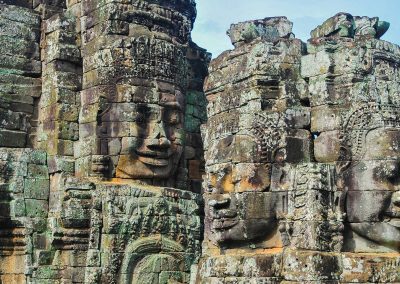 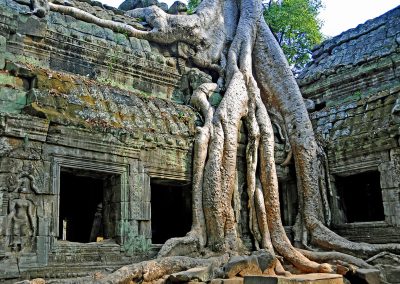 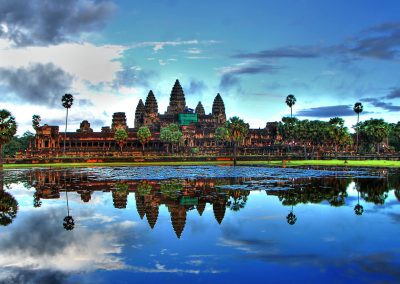 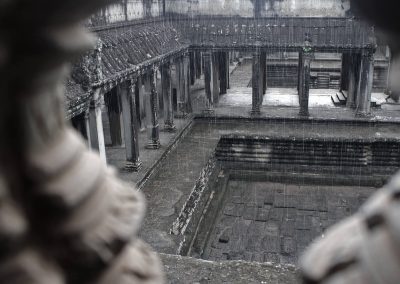 We’ll see of the most popular temples in Siem Reap on the Express Temple Day Tour of Angkor Wat, Ta Prohm, and Bayon.

Angkor Wat is the reason most visitors come to Siem Reap which lays only a few kilometres to the UNESCO World Heritage site of Angkor Wat. It was built in the early part of the 12th century by King Suryavarman II in what was then called Yasodharapura. At the time, Angkor Wat was the largest religious structure built anywhere in the world and it still holds that crown today.

Originally built as a Hindu temple dedicated to Vishnu, it slowly changed into a Buddhist monument. It’s the best-preserved temple in the Angkor Archaeological Park and today remains an important religious monument visited by millions of people a year. The temple has become the national symbol of Cambodia and features on the local currency, the national flag, and even has a beer named after it!

We’ll also visit Ta Prohm temple which was put on to the world stage by featuring as a backdrop in the Angelina Jolie classic, Tomb Raider. In the move, Angelina played the adventurous Lara Croft. The original name for the temple was Rajavihara and it was built in the late 12th and early 13th centuries.

Located just outside of Angkor Thom, the temple has been mostly left to the elements. There are trees and other vegetation growing through the temple. Ta Prohm is a UNESCO World Heritage site and little restoration has been done to the temple other than to make it safe for tourists to visit.

Bayon temple is also included on the Express Temple Day Tour. This is one of the most popular temples in Siem Reap and it’s the temple where you will see the famous faces of Angkor. The faces are said to be that of King Jayavarman VII, the prolific ruler who built Bayon and many other temples during his reign.

The Bayon sits in the centre of Angkor Thom city and was likely to have been a popular place of worship for Khmer living in Angkor Thom at that time. This Mahayana Buddhist temple was adapted to a Hindu temple and then a Theravada Buddhist temple. Like the other temples in the region, Bayon was deserted and left to the elements. Bayon temple is well-restored and a very popular temple for visitors.